A MASHUP OF BLOCKLY AND ONLINE PYTHON TUTOR
MADE WITH BLOCKLY https://code.google.com/p/blockly/
AND OPT http://pythontutor.com/

Here is my work of the last 4 months.

(To run it locally on your machine, you have to install Google App Engine for Python [which you can find it here at time of writing https://developers.google.com/appengine/downloads#Google_App_Engine_SDK_for_Python ] and then launch the google app engine program and ‘add existing…’ which will be the content of the zip from above, and press play to run it locally)

This work has been referenced in

Today I found another excellent, really really excellent web interface! It is based on ruby, sinatra and jquery!
you can find it here: http://madebynathan.com/2010/06/25/last-fm-on-embedded-systems/

I’ve installed git, ruby and sinatra on my raspberry pi , created the config.yml file and I was good to go!
(shell-fm was already installed on my r-pi following my precedent blog post)
Look here! Isn’t it nice? There’s also Album cover!!!
Nice work!

So this method is so naive that I’m not so proud of it.
But “hey, we have plenty of resources now, and we I’ve paid for it!” they say…
Actually this a homemade/handmade/whatever kind of parser for a JSON string like this:

What I do: I analyze every character of the json string, and look for a first  quotation mark like this ” .
Then I save all of the text until I find another quotation mark.
All the rest is ignored.
I build a string with all the characters inside the two quotation marks, and then add that string to a List.
Then I scan that list in another function, and when I find a field of interest, like ‘text’, I know that the related content of that field is one cell ahead, ready to be used (because the json string is structured that way).
Nothing more, nothing less, no libraries, so naive.
This is what I get if I print the elements of that list

Here is the code for processing (Java derived language) but you can quickly understand how to replicate it in other languages.

Did you know that with Paraimpu you can easily connect pretty much anything through a “sensor-actuator”-paradigm?
It’s pretty much like a “producer-consumer”-paradigm, but cooler, and web friendly, and social too!
Try it @ http://paraimpu.crs4.it/

I’ve created a feed-rss-tweeter in a matter of seconds!
Here I show you how I did the same exact thing for my Facebook profile! 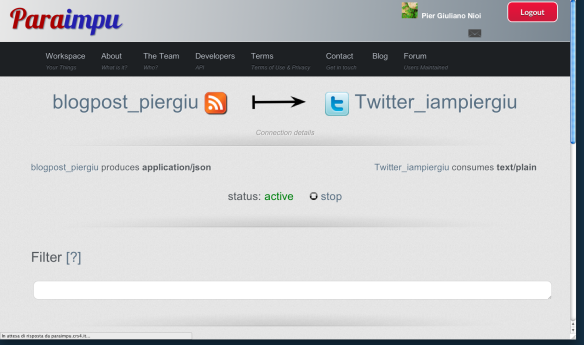 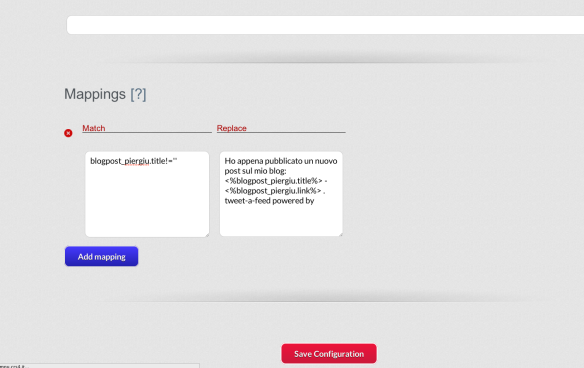 It’s almost a day that I’m trying to get things working in here.

I’ve set-up a small home server (actually is my old HP laptop running ubuntu 10.04) with some server applications like apache, mysql-server and other stuff like php5, ruby, and RAILS.

Then I used the rails command to build a new web application, and then I’ve tested if all worked correctly

Directed my browser to the famous address(localhost:3000), first I’ve got the message

After that, it been a long road until now, with installs , remove , clean, installs of various combinations of ruby and rails versions…untile I finally decided to give up.

For the last time I was installing RoR, but this time I tried without installing ruby and gems, but I let ubuntu install rails for me

After this last command I found that ubuntu installs all that you may need for rails, with only one command.

‘Maybe there is a problem with WEBrick!’ – I thought, and I’ve installed another ‘web server’ for rails, called Mongrel, and used that to launch my first web app.

Well, in this image, you can find the answer that I found at each refresh of the page…

Let the journey with rails begin!